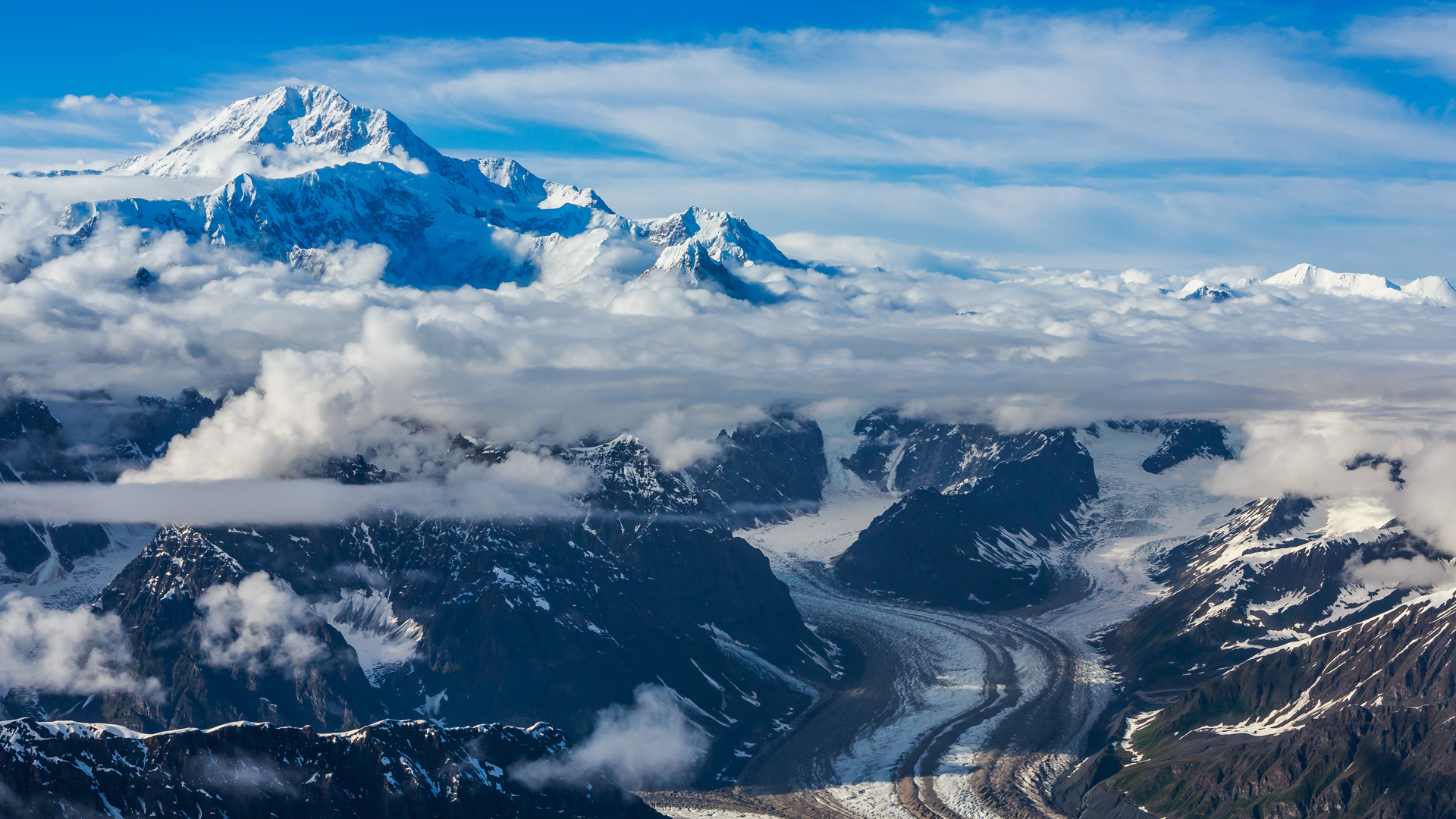 Mc Kinley, 6134 m high, called Denali by local Indians, is the first peak of North America. At the same time it’s the most powerfull peak situated near the pole and one of the highest in the world, when we consider the height measured from the foot of it. The summit was reached for the first time in 1913 by Hudson Stuk, Walter Harper, Harry Karstens and Robert Tatum. It was a great achievement for the team which climbed without any modern equipment and lacked the knowledge of modern climbing.
The mountains of Alaska are not the highest in the world – the great Himalayas tower thousand or two metres above them. But in the Himalayas the snow line is at the height of 5 thousand metres, whereas around Mount McKinley the whole area is covered with snow and ice. Denali is well known for its arctic frosts and blizzards that apeear very often. The wind, blowing at 160 km/h, combined with blizzard and 40 C below zero temperature, is not rare even in season. Blizzards that last a week or more are legendary. We’ll be reaching the peak at the turn of May and June, as June is one of two warmest months in the year and May provides more stable weather.The second warmest month – July, provides worse snow conditions. You must be prepared for great temperature differences, from + 32 C to -40 C. The strong wind may intensify the feeling of cold. For sure, sunny days will bring relief, and they will last for very long, or even forever (white nights).
We’re going to reach the summit along the normal route, the west Buttress crest. The first stage is the air taxi flight, we’ll fly on a four-place airplane from Talkeena to the base camp on Kahiltna Glacier (2200m). During the next days we’ll transfer the luggage on sledges to the camp called Basin, situated at the height of 4330m.The crest is exposed and leads to the last camp (5240 m), from which, when the weather is good, we’l be reaching the summit.The route is generally snowy, with crevassess that appear very often, howeve they can be hidden. Technically the most difficult passage is the one from Basin to the last camp ,which consists of the rock face sloping at 40 degrees angle and the exposed crest .
Mc Kinley is not an easy mountain. People who want to face it must be properly prepared. Climbing experience is important, especially when it comes to frosts, height and using an ice-axe and crampons. We suggest that you check the abilities of your body first on any of four thousand metre mountain in the Alps and during frosts in the Tatras. Reaching one of the highest peaks in the Alps in the winter would be a good way to test yourself. Above 5000 metres a general weakness may appear. This is connected with reaching the great height, you can suffer also headaches and other ailments. There is also a serious risk of frostbites and the chill of an organism. We try to provide a good acclimatization, to decrease the severeness of these symptoms and not to make them an obstacle on your way to the top. We stress the importance of the preparation of your physical conditon – marching, running, trekking. Every participant should have an ice-axe, crampons, telescopic sticks, snowshoes, a sledge, a harness and HMS carabiner with a sling.
Caution! Taking part in the expedition is impossible if great heights and low temperatures are harmful to your health. We suggest that you have a medical examination before setting out.

The price doesn’t include excess luggage (which rarely appears), alkohol, American visa, food down the mountain, hiring snowshoes or skis (100$ for snowshoes), additional sightseeing – probably the most interesting is the water safari on fiords where we can observe whales, seals, orcas, walruses and icebergs breaking off the glacier and slipping into the ocean.

1. If you are willing to take part in the expedition, please apply till the end of February. This deadline is required by the authorities of the National Park.
2. To confirm the reservation, please, pay 4500 pln for the plane ticket to the following account: Stowarzyszenie Annapurna Klub Santader Bank 34 1090 1652 0000 0000 6404 1166 with an annotation: Denali- flights, insurance and club’s fee. Please, inform us about the payment via e-mail or post.
3. Please send us your name, surname, date and place of birth, address of residence, via e-mail or post.

We fly to Anchorage, the biggest city in Alaska. From there we go by coach to Talkeetna, a place situated at the gates of Denali National Park. We pitch a camp on the local camp site. Next day, we are suppose to buy food and fuel, hire sledges and snowshoes, do the formalities connected with the park and the transport to the base camp. The next day, we fly by the air-taxis to the base camp on Kahiltna glacier (2200m). From this base camp, as soon as possible, we move our luggage to Basin base camp (4330 m), which will take us about 3 days. Depending on the circumstances, as the intermediate base camps we’ll choose some of the following places: Base of ?Ski Hill? (2400m), Upper Kahiltna (2900 m), Camp ?11? (3350 m), Bergschrund (3960 m), Windy Corner (4115 m). From Basin, with the part of the luggage we go to the highest situated camp- High Camp (5240 m), which is supposed to take about 6 hours. On our way we have to face a steep wall sloping at 40 degrees angle and a very exposed crest. We leave there our luggage and go back to Basin for a night. After that we get rest in Basin and the following day we take the rest of equipment to High base. Next day we attack the summit. We leave the camp as soon as possible. First we get to the pass Denali. Usually above the pass, there are very strong winds and hard ice forces climbers to focus. We go past Archdeacon?s Tower and reach the flat Fidel called the football pitch. Now, there’s only an endless crest and the peak ahead us. Getting there from the camp takes about 7 hours. The estensive view from the peak can be compared to the views from the eight thousand metres montains. From there you can admire the neighbouring Moose?s Tooth, Mount Hunter, Mount Foraker, huge glaciers that look like frozen rivers. From the top we go downhill to spend a night in High Camp. Next days are intended for getting back to the camp on Kahiltna, from where small aircrafts take us to Talkeetna. The possible free time before the return can be spent on resting among the primeval, unspoilt fauna and flora. We return to Poland after three weeks.
Due to the lack of time, weather conditions, participants’ health or any other reasons, the way of acclimatization may be different than the one presented above.