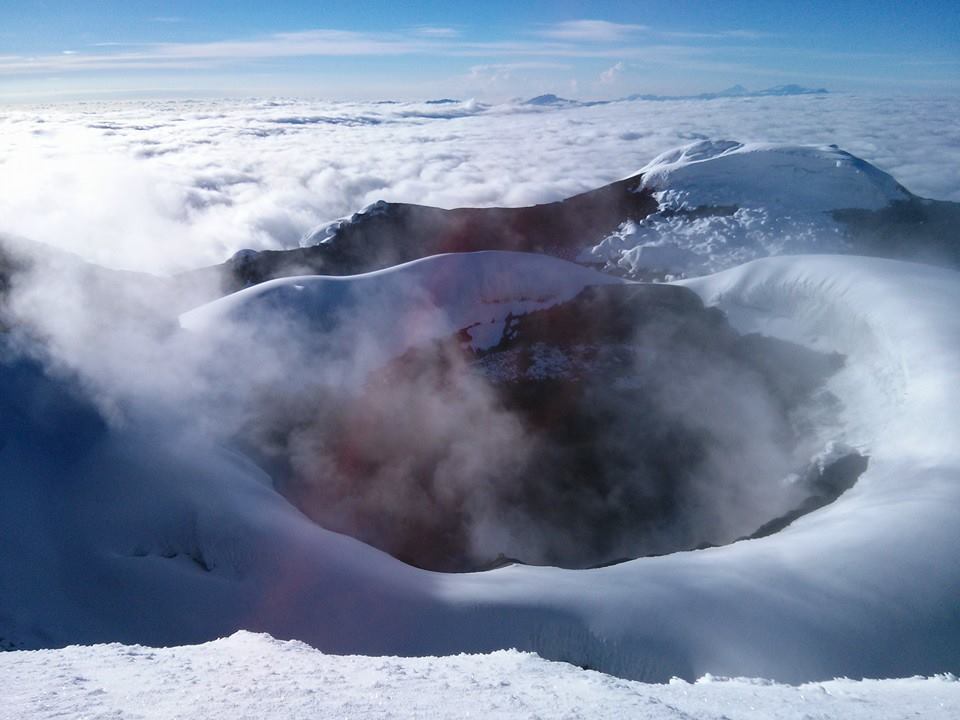 Equador is a country half smaller than Poland. On this small area we can find 30 volcanoes, amazon jungle, the ocean with unique nature, Incas’ civilisation masterpieces. Chimbarozo, 6310m, is not only the highest volcano in Ecuador, but also one of the highest volcanoes in the world, and because it it so close to the equator, it is the highest mountain on the Earth if we count it from its core. In this case it’s 2150 m higher than Mount Everest. It’s interesting that till the middle of XIX century the mountain was thought to be the highest mountain in the world. During our expedition we’ll try to ascend also another giant Cotopaxi – 5897m, which is the highest active volcano in the world and we’ll get acclimatised on another active volcano Guagua Pichincha (4780m).
The mountains in Ecuador can be characterised by very unstable weather. The best months for ascending Chimborazo are June-July, December-January. The mountain is very close to the equator, however its height causes that you must be ready for very low temperatures, at night the temperature can fall below -15 degrees. Volcanoes in Equador are often surrounded by fog, during the day and night. If we don’t want to get lost we must hire local porters who know the way perfectly as well as the places where crevasses appear.

We ascend along a classic trail, which is medium-difficult. It is sloping at 40 degrees and there may appear some steep passages. On Chimborazo it is sometimes more icy. Chimborazo is an extinct volcano, so the sloping is regular. On our way there will appear crevasses so we’ll be tight together with a rope. Medium technical difficulties make this mountain a perfect destination for more ambitious mountain tourists and climbers who want to test themselves at a greater height. 6310 is a challenging height. It’s almost 200 metres higher than McKinley! A bit easier to ascend is Cotopaxi (5897m), which is a very regularly sloping, beautiful volcano. The sloping is gentler, however, there are more crevasses and seracs so we have to use a ladder sometimes. What is amazing about Cotopaxi is not only the mountain itself but also the trail to the summit which is one of the most beautiful glacier trails due to the glacier’s shaping. At the top of the mountain we’ll see a crater which gives off volcanic fumes! The easiest destination will be the first mountain – Guagua Pichincha, which hasn’t got a glacier but is also an active volcano. Volcanic fumes given off by Cotopaxi and Guagua Pichincha create additional difficulties. They lessen the amount of oxygen in the air. Almost everyone suffer a general weakness caused by the great height, often accompanied by headaches. We try to ensure a thorough acclimatisation so as to make this problems less significant. That is why we start from the smallest peak and later climbing the higher ones we get acclimatised. Every participant must have a good condition. It’s also recommended to have a climbing experience gained in high mountains. We suggest that you prepare to the expedition by intensive walking in the mountains.

Caution!
It’s impossible to take part in the expedition if you suffer from any illness that makes staying at the great height dangerous to your heath.

The price includes; flight to Quito and back, transport by coaches and pick-ups in the mountains, other necessary means of transport, organisation of the expedition, food (2 meals a day – breakfast and dinner), climbing insurance, accommodation in tourist class hotels, accommodation in shelters in the mountains, Basic training, entrance fee to Cotopaxi and Chimborazo National Parks, stay at the ocean, club’s fee (500pln), Excursions; jungle near Puno or the ocean and de la Plata island (for the first time included in the price), local guides in Cotopaxi and Chimborazo (included in the price for the first time).

The price doesn’t include: excess luggage, alcohol, trip to the equator, possible trip to the jungle near the border with Columbia or Brazil (400$), possible trip on Galapagos (1200$)
The date of the expedition may change +/- (5 days)

1. If you are willing to take part in the expedition please, apply by 25th of august.
2. To confirm your application, please, pay 4500pln for a ticket and insurance to the bank account:  Stowarzyszenie “Annapurna Klub”  Santander, Tychy  34 1090 1652 0000 0000 6404 1166 with an annotation “Chimborazo- flight ticket and insurance”. Please inform us about the payment via e-mail or post.
3. Please, send us your name, surname, date and place of birth, address and evidence number via e-mail or post.

From Warsaw (or in case of a big difference in the ticket prices, from Berlin or Vienna, we provide the transport there) we fly to the capital of Ecuador – Suito. Next days are intended for acclimatisation. First we rest in Quito or possibly we go to the equator to observe amazing physical phenomena and to the crater of volcano. Next we ascend the active volcano- Guagua Pichincha 4794m which is next to the city. We get to the Indian village Lloa, from where, within next few hours we should reach the shelter at the height of 4500m, where we spend a night. After a night we ascend Pichincha along a beautiful crest, surrounded by the fumes. We get back to Quito the same day. Next we get acclimatised on the slopes of the highest active volcano in the world – Cotopaxi (5897). After a night in a hotel or a shelter we travel by a coach to the place called “Estrada del Cotopaxi”, where we get into the off-road cars and reach the height of 4500 from where, on foot, we go to the Jose Ribas shelter, situated at the height of 4700m. We spend the next day in the shelter and go for some walks around it to get acclimatised. Next day we ascend the volcano. The way to the summit leads us among powerful crevasses and takes about 6-8 hours. At the height of 5897 we have a possibility to look into the fuming crater. It’s got 700 metres in diameter and it was first explored by a Polish- Czech expedition in the 70s.
When we descend from Cotopaxi we take a coach to Banos, where we can get rest in hot springs. After that we go by bus to Riobamba and next, by a taxi to the Whymper shelter on the slope of Chimborazo at the height of 5000m. On our way we can admire flocks of lamas. If the visibility is good we can see 70% of our way on Chimborazo from the shelter. We get up at midnight and after a short meal we set off towards the summit. First we ascend on a snowy slope and after 2 hours we reach a broad crest, along which we continue climbing. We get to the first summit, from which we have to go 150m down and then we face the most difficult passage, which is ascending the main summit. After about 8 hours we should set our feet on the highest mountain (in certain respects). Descending to the shelter takes about 3-4 hours. Due to the safety reasons we can’t stay at the top longer than till 8 o’clock.
After the ascent on Chimbarozo we return to Banos, from where we can either go and stay at the ocean and take a cruise on Isla de la Plata or have a trip to the rainforest around Banos, where we could observe the jungle plants, swim on pirogues, eat ants and grubs, drink water from Teres, swim under a waterfall and visit a shaman.
Day by day itinerary:
– flight to Quito
– trip to the equator, eggs and water tests (voluntarily)
– ascending the shelter at the foot of Guagua Pichincha (4500m)
– ascending Pichincha, rest among the fumes (4800m)
– rest in Quito
– travel to the shelter at the foot of Cotopaxi (4700m)
– training and reconnaissance
– ascending Cotopaxi (5897m)- the highest active volcano in the world, the ascent takes place on one of the most beautiful glaciers.
-travel to Banos
– rest in Banos- hot springs, a town similar to Zakopane, at the foot of an active volcano Tunguraua.
– travel to the shelter at the foot of Chimborazo (5000m)
– ascending Chimborazo (6310m)- the highest mountain in the world measuring from the earth core.
– return to Banos
– 3-4 days trip to the jungle around Puno or at the Ocean
– return to Quito
– flight to Poland

– Goretex or similar jacket
– 2 polar fleece jackets – polar 100 and polar 200, or polar 200 and polar 300, or polar 200 and a down-filled sweater
– polar fleece trousers – polar 100/150
– goretex or similar trousers
– 2 pairs of woolen or other warm socks
– other socks including anti-sweat ones
– 2 pairs of thick polar gloves (they can’t pinch fingers especially their tips), possibly warm skiing gloves, the best- down-filled over-mitts.
– goretex over-mitts
– hat
– breathable underwear
– mountaineering boots or modern thermal shoes, or thick and warm leather shoes with a thermal lining (they must be loose enough not to pinch the toes eden when you are wearing a thick sock, and tight enough to make the heel stable while walking) the best 1-1,5 size too big
you may take spare light trekking shoes
– trainers or sandals
– glacier glasses
– trekking gaiters