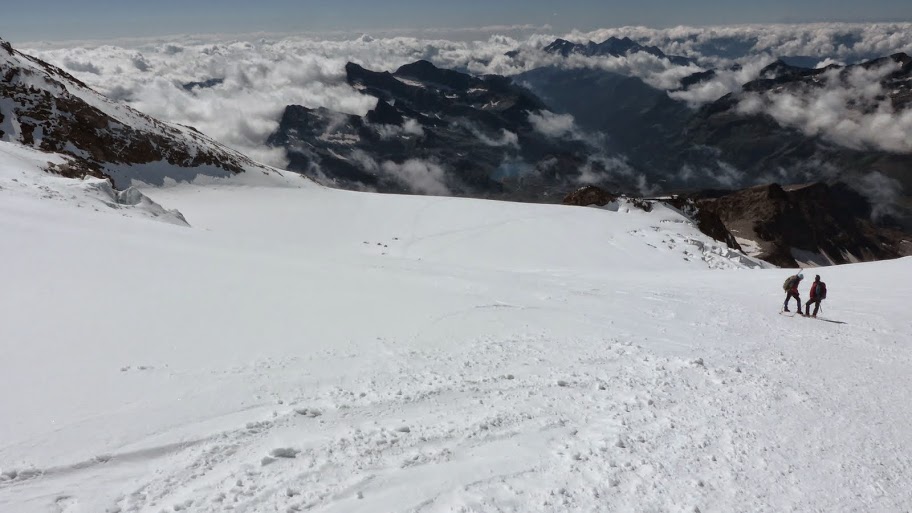 “There’s no other mountain that reaches such a great height” said Leonardo Da Vinci when, at the ending of XV century, he climbed a small mountain Monte Bosso. Now we know that he didn’t make a very big mistake as, although the biggest peak of the Monte Rosa group – Duforspitze is shorter only than Mont Blanc, here we can find the most 4 thousand metres on such a small space and Monte Rosa is the highest massif of Western Europe.
The main peaks of the massif are; abovementioned Duforspitze 4634m and its western wall which is said to be the highest wall in Europe, Nordend 4609 m., Zumsteinspitze 4563m, Punta Gnifetti 4554m, Parrotspitze 4432m, Ludwigshohe 4341m, Schwarzhorn 4322m. And Piramide Vincent 4215m. Our expedition aims at reaching 6-7 peaks and 3 peaks higher than 4000m.
The view from Punta Gnifetti is considered to be the broadest in the whole Alps – it’s said that when the weather is good, in the south you can see the Medditereanan Sea. The expedition is planned in a way, which allows to make the most of the time and acclimatise by ascending the shorter and easier peaks first and, at the end, attack the highest one- Punta Gnifetti 4550m. If the group is experienced, there’s a possibility to ascend the highest peak – Duforspitze. The difficulties are not greater than II grade (only in some parts) and sloping at 40 degrees, except for Duforspitze where II grade of difficulty is constant and sometimes you can even face the III grade.
Although it doesn’t sound dangerous, it has to be taken into account, that we’ll ascend along highly exposed crests. Due to the height you can sufer from the lack of oxygen, low blood pressure, wind and strong sun. In relation to the aclimatisation a general weakness may appear. That’s why we suggest that you prepare your condition e.g. by marching and running with a rucksack.
Caution! It’s impossible to take part in the expedition if great heights are harmful to your health. The team leader has an experiece in climbing in this area, he climbed Duforspitze.
In places and situations that can be dangerous the leader provides a necessary safeguard appropriate for the situation. During all our expeditions we try to ensure a thorough acclimatisation. One leader takes care of 4-6 people. The expedition is for those who can use an ice-axe, however, those who can’t will be trained.

price includes: organisation of expedition, accomodation in tents- in the mountians and

on the camping sites, alpine insurance, we are taking packed food to prepare by

ourselves during the trip, basic icefield check and preparation, cable car both ways

price does not includes costs of transportation.

We depart from Katowice, from where we get to Italy, to Tschaval (1825m.), possibly we can meet at this place. After a short rest, when we pack our food supplies we take a ride , and then we go on foot to Gnifetti shelter (3647) which is the main destination of this stage. (if participants’ condition is poor we can divide this stage into 2 days). We pitch our camp around the shelter and after a night we start our ascent on the first 4 thousand metres mountain – Piramide Vincent 4556m. We reach the summit after about 3 hours of climbing a glacier and a crest covered by rocks and snow. For the strongest participants, there is a possibility to climb 2 hours more and ascend the second 4 thousand metre mountain- Punta Giordani 4046m. After 6-8 hours we are back in the shelter Gnifetti. Next day we get up very early, leave our tents in the shelter and set off for Balmenhorn shelter, which will be our base camp from where we attack Corno Nerro 4322 and Ludwigshohe 4341, which will be ascended the same day. After a night in an abandon shelter we start climbing through gentle snowfields towards Lisjoch pass and before we get there we turn east towards Parrotspitze 4436m, and we reach it along a snowy western crest. From the peak we descend to Seser pass (4300m) and start to climb on south-western slopes of Punta Gnifetti 4556 m. Untill we reach the peak where is the highest situated mountain shelter in the world – Margarita Hut. It owes its name to its founder – queen Margaret. Next we all set off to climb Zumsteinspitze- the ninth 4 thousend metres high mountain on our route. If the group or at least a part of it is strong enough we’ll try to ascend difficult and dangerous Duforspitze, where the difficulties are of the III grade and appear in great amounts. This decision is taken by the leader! If we try to ascend Duforspitze, we’ll spend the next night in Margarita shelter. If not, we’ll descend to Balmenchorm. Next day is the last one we spend in the mountains and it’s intended for descending to Tschaval from where we return to Poland. The itinerary given above can change or be implemented only partially due to the condition of the participants, weather conditions, major forces. The expedition lasts 10 days, which include 8 days of mountain actions and two days for the journey.