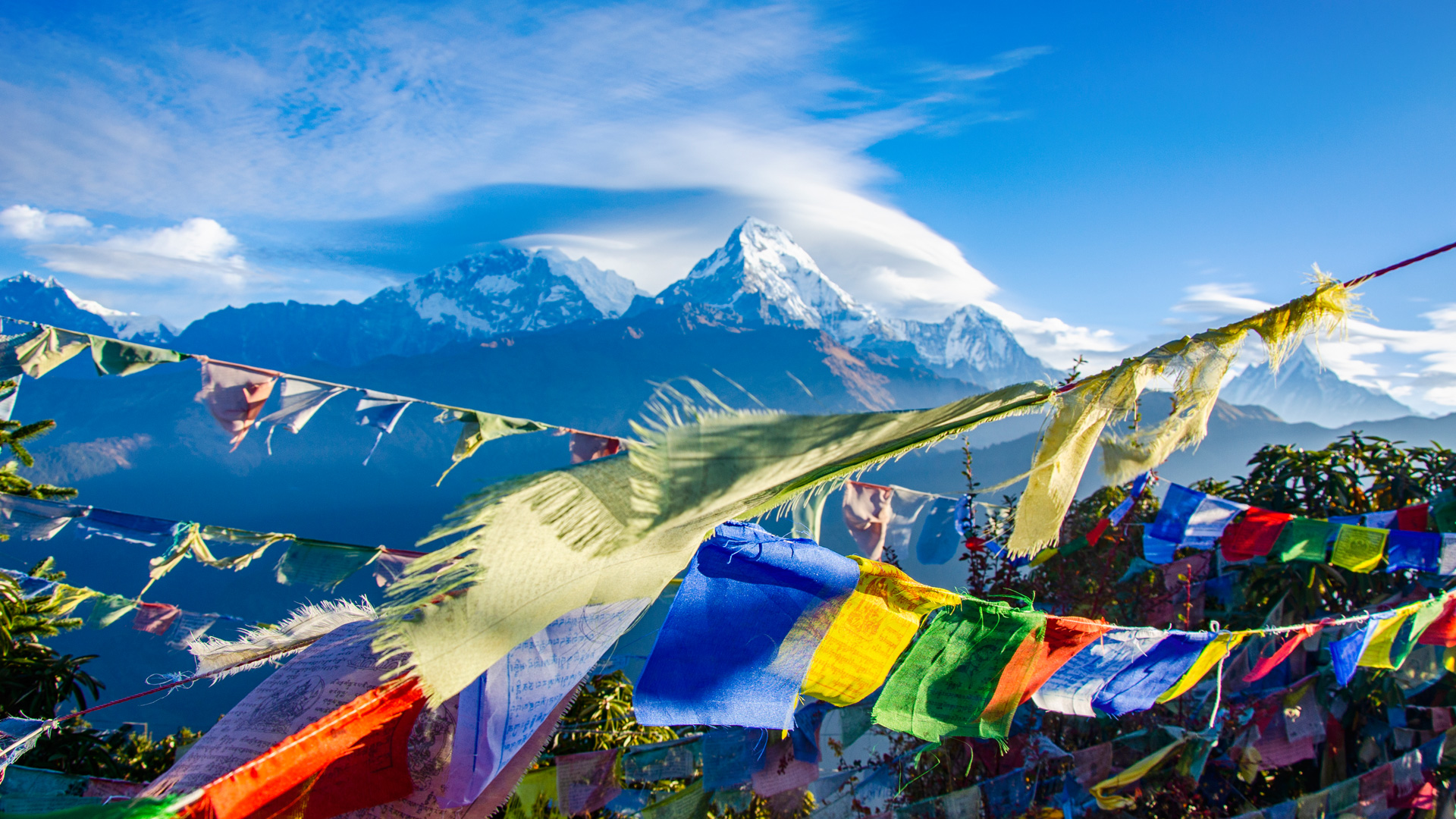 The Himalayas- this name is associated with the highest mountains in the world. Nepal is the country where these mountains are the biggest and most beautiful. There are eight of fourteen 8 thousand metres high mountains including the highest mountain- Mount Everest. Huge white peaks tower above a thick, green, monsoon zone. Tropical jungle, hills cut by river terraces, fields, from where streams flow down, usually forming waterfalls, snow and glaciers- those are the main attractions we’ll be able to admire in the Himalayas.
The Himalayas are not only the mountains. A mixture of two religions and races we can face here brings about some very interesting consequences. Holy cows hanging around in the streets, burning corpses floating on the waters of one of Ganges tributaries and monks dancing on the roof of one of the monasteries are sights characteristic for this area. Coming to Nepal we can be sure that ascending a mountain will not be the only attraction here. It’s difficult not to try riding a rickshaw among the monuments of Kathmandu, rafting on a wild mountain river or taking part in Buddhist ceremony.
Our main destination is Dapa Peak (6035), next we’ll try to get to French Pass (5400) which is famous for one of the most beautiful views in the Himalayas. Next we’ll get to the Hidden Valley. It’s situated a few kilometres to the north of giant Dhaulagiri (8167m).  It was first ascended by a French expedition which was looking for the way on Dhaulagiri. They changed their plans and moved to the Annapurna region, and managed to ascend it. It was the first 8 thousand metres hight mountain that has ever been reached by a human. Dhaulagiri was reached only 10 years later as the last 8 thousand metres high mountain in Nepal by the expedition in which also Poles – Hajdukiewicz and Skoczylas took part.
Nepal is in a monsoon zone so the rain season lasts here from May to September. This is the most inappropriate time to climb in this region. Heavy tropical rains are very common at this time and higher in the mountains there are heavy snowfalls. October is the first month of the Himalayan Autumn and that’s the best time for trekking, between the Summer and the Winter. The weather is stable and the sky is very clear. The Himalayan Autumn allows also for admiring the beauty of the nature. The air is clear and the peaks are visible even from a great distance. Temperatures at night can be very low, -10/+10 degrees above 3500m, -25/0 degrees above 5500m. Due to the great height the sun is very strong . However, recently due to the change of climate, there might appear heavy rain or snow falls even in the dry season.
We’ll ascend the summit along quite easy crests, they are easier than the ones that lead to Mont Blanc. However, before we start climbing, we’ll spend few days on ascending, first, without any difficulties, through Kali Gandaki Valley, one of the deepest valleys situated between Annapurna and Dhaulagiri massifs. Next, on the eastern slope of Dapa Peak to the Dapa Pass (quite steep but not technically difficult slope), from where we’ll attack Dapa Peak (6012m). After that we move to the French Pass and if we are strong enough and the conditions are good, we’ll descend to the Hidden Valley.

The summit is available for any experienced climber, however it requires a good condition and the ability to stand the height. Rarified air is a serious obstacle, above 5000 metres, everyone suffers from general weakness, sometimes you may feel dizzy or suffer from a headache or stomachache. We try to ensure an thorough acclimatisation so that these ailments could appear on the least significant level and weren’t the obstacle on your way to the top.
We pay attention also to the preparation of your condition before we set out. We suggest that you march, run or walk intensively in the mountains. It’s useful to have a high mountain climbing experience, e.g. ascending a 4 thousand metres high mountain in the Alps. You have to take telescopic sticks, crampons and an ice-axe which may be used if the crest is icy. In case of the snow, it’s worth to have snowshoes. If there is a lot of snow the porters will get only to a certain level.
Caution!!!
It’s impossible to take part in the expedition if staying at great heights or in tropics is harmful to your health.
It’s recommended by the doctors to have a vaccination against Tetanus and jaundice before setting out.
The trail we’ll be following has been covered by the organisers before.

1. If you are willing to take part in the expedition, please apply not later than in the middle of August.
2. To confirm your application, please, pay 3600pln for the ticket to the account; Stowarzyszenie  “Annapurna Klub” Santander Bank 34 1090 1652 0000 0000 6404 1166 with annotation “Himalaje- flight ticket and insurance”. Please, inform us about the payment via e-mail or post.
3. Please, send us your name, surname, identity number and address via e-mail or post.

We fly to Kathmandu, arrange the matters and visit monuments e.g. Hindu temple Pashupatinath, which is an equivalent of Hindu Varanasi. We can see a ceremony of cremation and Buddhist stupa; Swayambunath. In the evening we’ll try riding a rickshaw in the old city. Next day we go by bus to Pokhara which is a starting point for many trekking trails. The Great Himalayan range is very close to the city, the great wall made of rocks and ice is really impressive. Another attraction of Pokhara are picturesquely situated lakes. In Pokhara we organise porters and provisions so that we could go on a 5 days trekking in Kali Gandaki Valley, which is one of the biggest in the World. We go through a tropical jungle and step into many beautiful and neat villages. Very often in a village inhabited by Tibetan people the main religion is Buddhism. In another village 2 kilometres away white people profess Hinduism. In Tatopani village we’ll take a swim in hot springs. In Tukuche we’ll take part in a ceremony in a Buddhist temple. We’ll also have to cross a few suspension bridges. We can admire a few beautiful waterfalls and the Dhaulagiri massif. Apart from tourist we’ll meet on our way yak’s caravans and porters. At the end of the trekking the soil becomes arid and the hills instead of the jungle are covered with grass, the sky seems to be closer, we are in typical, Tibetan conditions. We get to Marpha village, where a light trekking ends and we stop sleeping in hotels and start an authentic mountain adventure. It’s a very original place, its congested housing protects the village from strong winds and the system of underground channels supplies water to numerous apple orchards. in the evening we visit a Buddhist monastery. Next day we ascend to Yak Kharka (3960) which is a yaks grazing zone. Sometimes there is a possibility to see these wonderful animals. After seven hours we pitch our camp and spend the next day there to get acclimatised admiring a wonderful view on Nilgiri. After that we ascend Dapa Pass (5200m). This ascent is very long, the last four hours we move in snow, sometimes uphill and sometimes downhill having the pass within sight all the time. When we finally reach it we pitch a camp there. Next day we ascend Dapa Peak.
We ascend along a quite easy, snowy crest, where, in case of ice, we put on our crampons. We walk slowly step-breathe in, step – breathe out, after four hours we are on the peak of our 6 thousand metres mountain. From the summit we can admire a wonderful view on the neighbouring giants – Dhaulagiri and Annapurna, and on the Kali Gandaki valley. It takes two hours to get down to the base camp. Next we set off towards the French Pass (5400m), from where we can admire the northern wall of Dhaulagiri, Hidden Valley, iceberg Sita Chuchra and endless hills of Tibet. If there is enough time we’ll also descend to the Hidden Valley. Next we return to Marpha which takes us 2 days. In Marpha we can have a shower – a first one after a long time, and we’ll sleep in beds. Next day is intended for an ascent to Jomsom, from where we fly on small planes to Pokhara. From the plane we also can see wonderful views on the mountains, Kali Gandaki Valley, terraces, rice fields, and great Annapurna and Dhaulagiri massifs. After 15 minutes flight we land in Pokhara. On foot this would take us 5 days.
The remaining time can be spent on resting in Pokhara and Kathmandu or – voluntarily- rafting or an elephant safari. We return to Poland after 3 weeks.

– Mountaineering boots 1-1,5 size too big or thermal shoes (e.g. Millet Expert), you can also take very warm leather shoes, however, we’ll be living in tents for a few days and the shoes may get wet with time and it will be very cold at night
– 2-3 pairs of woolen socks or other very warm ones, other socks (including anti-sweat)
– goretex trousers or other ones protecting from the wind and snow
– trekking gaiters
– 2-4 breathable t-shirts
– Polar fleece jackets- polar 100, 200, 300, it’s better to take down-filled sweater instead of polar 300.
– Goretex jacket or other similar one
– Goretex over-mitts or very warm skiing gloves – too big
– 2 pairs of polar gloves – polar 200, polar 300 (loose fingers)
– down-filled gloves
– hat
– hat or scarf protecting from the sun
– sleeping bag, down-filled; 0,8- 1,1 of down (1,2-1,5 kg) or with synthetic filling 1,8-2 kg
– rucksack 65- 90l
– rucksack 40l
– sunglasses covering eyes well
– sun protection cream, factor 30-60, the best Vichy
– something to protect the face, e.g. mask
– chemical warming agents
– thick foam pad or self blowing mattress
– NRC foil or bivouac bag
– Mess tin, cutlery
– 2 rolls of toilet paper
– headlamp and spare batteries
– watch
– vacuum flask07l-1l
– articles of toilet

We wish you unforgettable experiences, delight of exoticism and wonderful views on the Himalayan giants